1912- The London Diocesan Mission had taken over a field around the area of St Augustine’s. In October, boundaries got defined, and a site for a church got chosen. Father George Day, Missioner-in-Charge.

1913- The first St Augustine’s Church got built. It was a wooden building, surrounded by fields and farms, dedicated by the Bishop of Willesden at Candlemas on February 2nd. Historically, St Augustine’s is a new church at 100 years old, but in local terms, it is relatively old. St John’s Church in Wembley High Road is more senior, built-in 1846.

By 1912 those in charge felt that a church closer than St John’s or St Mary’s, Harrow-on-the-Hill, would be more accessible for local people to reach on foot.

1918 – 1925- After the 1914-1918 war, people felt that a more significant and permanent church should get built. Progress was slow following the war years. The Wembley Park area remained a rural backwater, visited only by day-trippers out for a picnic and a breath of country air.

1924 – 1925- Wembley became the centre of the nation’s attention overnight. The Empire Exhibition had arrived with all the publicity and media news. Industry and new housing projects began. Funds for the planned church took an upward turn. Proceeds from the sale of St Mary the Virgin, Westminster, were allocated to the building of St Augustine’s. Gifts of church furniture got given for the new church. Building work began on the site, and the second St Augustine’s Church took shape.

During this time, the Empire Exhibition drew vast crowds, and a chapel got erected on the Exhibition site. Dedicated to St George, the Clergy’s responsibility was to be present for regular services and private prayer. This duty fell to the priest, Father Day.

1926- Following the laying of the foundation stone by the Duke of Devonshire, the new church got completed in February 1925. It then got consecrated by the Bishop of Willesden, Bishop Perrin, on October 9th 1926. The Rev. George Day was appointed the first vicar, and life in the parish continued smoothly until the outbreak of war in 1939. During the early years of the war, there was a lot of local bomb damage. 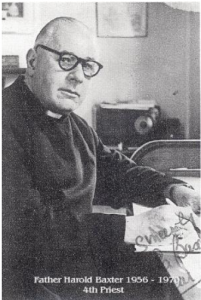 1944- One bomb, in particular, fell alongside the church in Wembley Hill Road. It flattened the three bungalows and damaged the foundations of the church. Father Day resigned due to ill health. A new vicar Father Peerless, who received a lovely welcome, succeeded him

1950- During plans for the beautification of the Chancel, it became evident that there was severe damage to the church building. Those in charge attempted to rectify the damage, but those attempts were insufficient to make the church entirely safe.

On November 3rd 1950, those in charge decided to close the church for good and demolish it.

At that time, people realised that the cause of the fault in the foundations was due not only to the bomb damage but to the fact that the land site had the history of a ‘pond’ or regular fill of water. 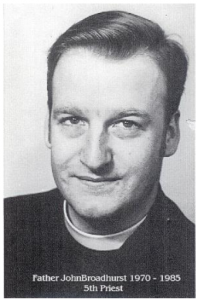 1953- Services during the demolition era took place in the old church (1914). In 1953 the Bishop of Willesden, the Rt. Rev. Gerald Ellison, performed laying the foundation stone for our present church – the third on the site.

1972- The original 1914 church, still used as a church hall, sadly caught fire and was destroyed. Father Broadhurst, the vicar at that time, appealed for funds to replace the hall.

1974- A new spire got added to the church, and administrators decided to hang a bell from St John’s, Causton Street, SW1, to the spire.

1990s- By the late 1990s, church administrators decided that the “new” hall had come to the end of its usefulness.

Church administrators created plans for a new building, a hall that would adjoin the church and complete access to social events much more accessible, especially in bad weather.

A grand building plan was underway.

2000- Scaffolding, mud, and lorries everywhere welcomed the new millennium. The building took shape, and on June 11th 2000, a hot and happy day, the Bishop of Willesden, Graham Dow, came to bless our new project and put in place a plaque to mark the event.

2007- The digital age arrived at the church through the efforts of Father Trevor Crichlow and the then PCC members. The church introduced a data projector to support the Sunday services and a sound system. Also, the Parish office got its first computer.

2009- Following an inspection, a severe crack in the bell got discovered, so the Church bell had to be stilled. The church launched a fundraising drive for a replacement. In 2010 Parishioners and friends of the church were able to raise funds to purchase a new bell from the Whitechapel Bell Foundry, which installed the bell in 2011.

2011 -2012- Parishioners said goodbye to Father Trevor and welcomed The Reverend Helen Askwith as the new vicar.